As a Wolves fan, imagine my delight when, out of the blue, I got a message saying that Molineux and England legend Steve Bull was following me on Twitter. 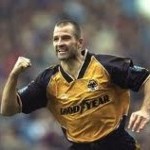 I spat out a mouthful of tea in shock and dropped everything to go onto Twitter and follow him back at @Stevie_Bull. I then read some of his tweets. And that’s when the alarm bells started ringing.

I desperately wanted it to be the 306-goal Wolves ace. As a rule I try and avoid following celebs on Twitter but I was willing to make an exception for one of the finest human beings ever to wear the old gold and black.

But something just didn’t add up and unless someone (Steve Bull himself) proves me wrong then I’m sure I’m following a fake on Twitter. What’s the point of that?

I want to hear the thoughts of the genuine article in snippets of 140 characters or less, not some wannabe.

The thing that puzzles me is why someone would go to all that time and trouble to do that? What could they possibly hope to gain?

Maybe it’s a West Brom fan trying to be funny at Wolves’ expense. Maybe it’s a Wolves fan living the dream. Maybe it’s some uber-clever marketing campaign which is grooming me in some way. Or, something very sinister.

Please tell me I’m missing something here. Someone, anyone, please enlighten me because try as I might I just don’t get it the point of a being a fake tweep.