One of the things that brings joy to my heart is clients who love and embrace smart ways to market their business.

Within minutes of me telling Heywoods about QR codes, they’d put one in their shop window to test the reaction of passers by. 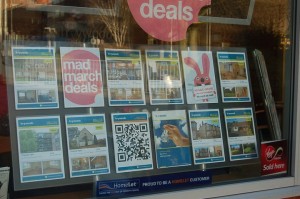 Those in the know will no doubt snap the QR Code with their smartphones out of curiosity to see where it will take them. In this case it’s the front page of the estate agent’s website.

For those who have no idea what it is are, at the very least, doing a double take -and some have even popped their heads around the door to ask what it is. The consensus of opinion is that it’s some sort of magic eye picture.

Heywoods’ marketing assistant Amy, also posted the picture on Facebook and tweeted it for people at its virtual front door. She added an extra incentive into the bargain by offering the princely sum of a Cadbury Creme Egg for the first person to call in and tell her what the code is and show it being used.

It’s a brilliantly simple example of smart, no-cost, marketing done well. Oh actually, it’s going to cost Amy a Creme Egg – which is as yet unclaimed.