If, like me, cold calling new business prospects strikes terror in your heart, then maybe we can both learn a thing or two from Sherlock.

The Sherlock in question is actually a fella called Mark Hessey from the Irongate Group.

I got an email from Mark one Friday afternoon that essentially asked if I was the Paul Kirby whose client was Apollo Blinds. And, if I was, could we meet because he had something he thought I’d be interested in.

Between the ‘are you Paul Kirby?’ and ‘let’s have a coffee’, Mark spelled out how he’d done a bit of detective work trawling Apollo’s website and eventually finding a film of me on its YouTube page. From there, he tracked me through Google and social media sites such as Twitter and LinkedIn to my website.

I replied to Mark’s email within minutes for the following reasons:

Above all, I was flattered. It’s a basic human instinct and who was I to refuse an offer from someone who clearly had a burning desire to meet me. 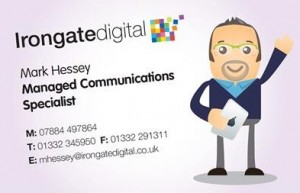 For that reason alone, I’d have probably met him. But the real clincher was actually down to ‘right time, right place’ timing.

As luck would have it, I’d been reviewing the very issue for my client and was in the process of compiling my recommendations, so meeting Mark was a no-brainer and, as a result of having a Starbucks, I’ve included his proposal in the mix.

In future, I’ll think of Mark Hessey when I have to contact people I’ve never met before because it’ll remind me that: