If there’s one way better than any other to get people to stand up and take notice of your marketing campaign then being controversial has to be the riskiest yet broadly most successful strategy of all.

And as far as US clothing manufacturer American Apparel is concerned this is clearly a risk well worth taking, for it has just sparked a Twitter storm surrounding its latest ad campaign that cashes in on the disruption caused by Hurricane Sandy. 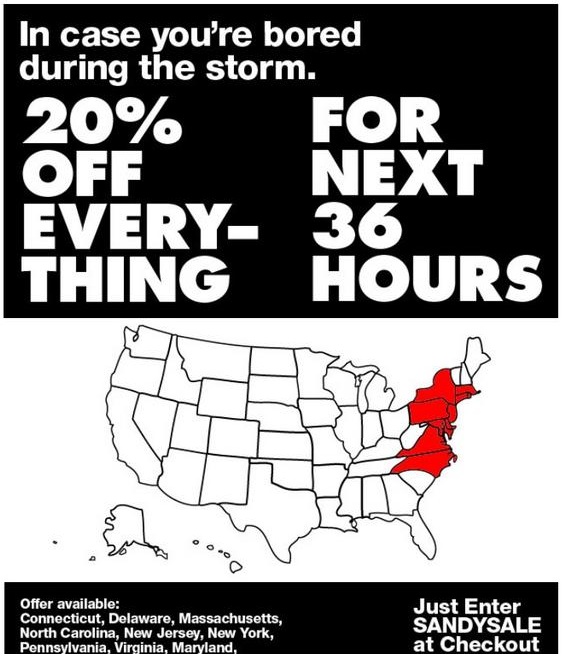 The company sent out an email announcing its Hurricane Sandy Sale, in which customers living in the areas affected were entitled to a 20% discount code off everything in store throughout the 36-hour duration of the storm.

The ad featured a map showing the states across north-east America where the offer was valid and was headed by the strapline ‘In case you’re bored during the storm’.

Almost inevitably, the ad did not go down well in certain quarters.

As a result, many Twitter users took to the microblogging platform to voice their objections to what they saw as a tasteless attempt to make a quick buck on the back of a national disaster.

And so much so that the story quickly transcended the realms of social media, making headline news in newspapers across America and throughout the world.

Some people in PR circles may well argue that this is basically another in a long list of high-profile social media blunders, which includes amongst its ranks a Twitter backlash to a McDonald’s promotional hashtag and Starbucks’ disastrous Proud to be British campaign.

But let’s face it. Whether or not people are having their homes and businesses flooded, roofs blown away and communications cut off, life still goes on.

And so, during a difficult time, many people will actually welcome a bit of advertising humour and cheer, a good few quid off their favourite clobber and something else to do while they take refuge from the storm.

In other words, while being controversial may offend a few sticklers for political correctness, the positive PR benefits for your business will by and large far outweigh the negative, as you’ll quickly discover when the phone starts to ring or the tills begin to roll.