Some people would say you’d be mad to publish a calendar featuring 12 pictures of insane asylums scattered across the country.

But, as any PR practitioner will tell you, if you have a whacky product idea that has the potential to attract widespread media attention then the resulting publicity could be more than enough to make it a resounding business success.

So when oddball entrepreneur Kevin Beresford launched his Insane Asylums of England 2013 calendar, featuring some of the most notorious mental institutions in the country, it perhaps came as no surprise that sales of his crazy calendar soon went through the roof. 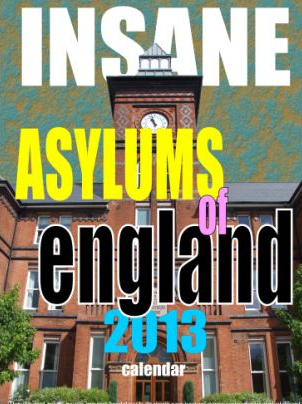 Beresford has already sold more than 4,000 copies of the £9.99 calendar since its release and is looking forward to bumper sales in the run-up to Christmas following a frenzy of coverage in regional and national newspapers.

Many of the hospitals featured are, in fact, stunningly beautiful old Victorian buildings, but are better known for the medical scandals and controversial methods of treatment associated with them.

Some have been the setting for many highly questionable medical practices, such as the use of straitjackets, seclusion, electroconvulsive therapy (ECT) and lobotomy.

For this reason, and because of the stigma that is still sometimes attached to mental illness, none of the buildings selected for the calendar are still in use as psychiatric institutions.

The 60-year-old printer and author from Redditch, Worcestershire says that the calendar has proved particularly popular with people from the medical profession and those with a black sense of humour.

He has already established himself as the king of the mind-numbingly boring calendar, with sales of more than 100,000 calendars to date, featuring the likes of prisons, bus routes, canals and, perhaps most famously, roundabouts.

And we’d have to say who cares whether the subject matter is boring and unimaginative or not.

If you hit on a great marketing concept and people are happy to buy into the idea of getting a giggle from something that is mundane to the point of ridiculous then, sure enough, the cash will come rolling in at the tills.