Sorting the factual from the fake news

11th January 2019 - What journalists want: be the hero of your story

Journalists are all too willing to give PR folks and their clients the heads-up about what they need so that everyone gets what they want: the journalist gets a great story, the client gets great media coverage and the PRs gets a feather in their cap.

In a recent webinar hosted by Jon Card, a freelance journalist specialising in SME businesses who writes for a range of media, including The Guardian, he talked through some of the key points that entrepreneurs and PR professionals should consider when developing PR pitches, particularly for national media.

No matter how lofty or worthy any PR campaign, he said you should never lose sight of the fact that, at its heart, good PR is good storytelling. And, as with any good story, there should always be a hero.

Jon talked about interviewing some of the great entrepreneurs and said that they all had a great story to tell, where they are the hero of the story. He said that this is because most journalists, no matter who they interview, will always start off with the same question, which is “tell me about your business” – from which they’re looking for answers to the following:

The third point is the real clincher: what motivates the person to do what they do and the obstacles they’ve overcome to achieve success. Jon called it ‘the hero’s journey’. He cited a few examples in the webinar of people – such as Richard Branson and the guys who set up Innocent Drinks – who all have a great hero’s journey.

In each case, the hero’s journey is a rollercoaster of highs and lows – which makes the story more compelling. And, crucially, more memorable.

All this got me thinking, and it reminded me of a hero’s journey that I’ve worked on for the last five years. 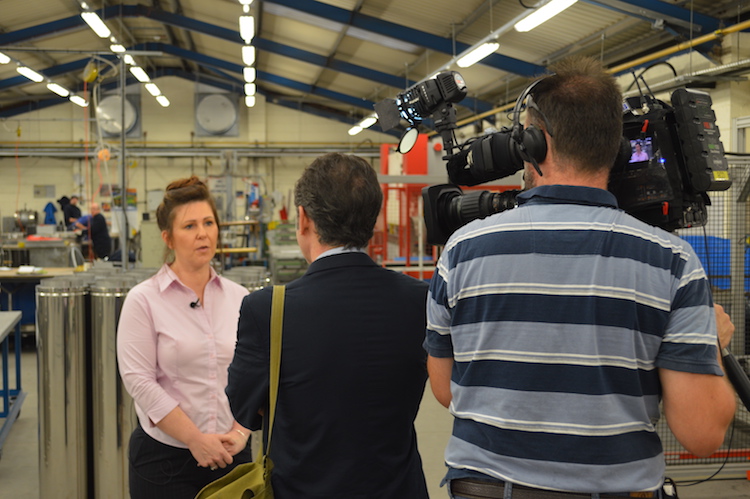 Colin Moir was a professional footballer but gave up the game he loved because even though he played for Nottingham Forest in the late 1960s, the £20 a week wages weren’t enough to bring up his young family. More by luck than judgement, he got into the air-conditioning and ducting industry and spotted an opportunity to develop commercial flue systems. So, in 1973, he set up his own company; 45 years on, Colin is semi-retired and his daughter TJ now runs the family business and has taken the business to a new level. It now employs more than 140 people and is the UK expert in flues and chimneys for skyscrapers – with high-profile projects including The Shard.

This hero’s journey has been at the centre of every press release, award submission and media interview that TJ does. And it’s clearly a great story because it won them a clutch of awards and has delivered plenty of awards and media coverage. TJ has been on ITV News at Ten, BBC News at Ten and BBC Breakfast, to name but a few.

So, who’s the TJ in your business?

The first action of any business looking to ramp up their PR or publicity should be to search for the hero (sorry, I can’t stop singing the M People song in my head now) and then chart that journey because if it’s told well enough, it’s the kind of story that ‘journalists such as Jon Card are keen to hear.