If there’s one thing we stress above all else to anyone engaged in a Twitter social media campaign then it is always ‘think before you tweet’.

So imagine our surprise when a maladministered tweet on behalf of Plumpton Racecourse ended up giving the sporting venue invaluable positive publicity and a significant boost to the number of followers to its official Twitter feed.

Instead of the usual official news from the Sussex racecourse, followers of @PlumptonRaceDay could barely believe their eyes when they received an update containing the message ‘Oh and by the way, I want your hot body tonight babe. xxxxx’. 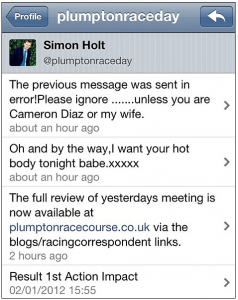 "Oh and by the way, I want your hot body tonight babe. xxxxx"

The account is officially updated by Channel 4 horse-racing commentator Simon Holt. However, it turned out that he was off that day and that a local newspaper reporter, Jason Hall, was posting tweets in his absence.

Hall was updating the feed throughout the day from his mobile phone and the randy words in question were supposed to be a text message to his wife, which he ended up posting to Twitter by accident.

Word of the saucy tweet then very quickly spread across the social media platform, leading to a sudden increase in the number of followers by more than 100 within just a few hours.

This was quickly followed by coverage in several national newspapers, who fortunately for Plumpton Racecourse all saw the funny side to the story.

Although we were also clearly tickled by the tale too, it does nevertheless convey a more serious PR message.

And that is just how easy it is to make a typing blooper on social networks such as these, especially when updating from mobile devices where it is so much easier to press the wrong button and release a potentially embarrassing message into the public domain.

In this instance, Holt and Plumpton Racecourse were able to use to their advantage the fact that someone else had temporarily taken over responsibility for their tweets and got away with it nicely.

However, on relatively few occasions have we seen similar social media blunders turn out so favourably. So don’t say you haven’t been warned.