A new bus campaign featuring topless models holding signs saying ‘Ride me all day for £3’ has sparked outrage and hit the headlines.

The topless pictures of both a man and a woman were featured on the back of ten of New Adventure Travel Ltd’s (NAT) buses being driven around Cardiff as a ‘tongue-in-cheek way’ to promote the idea of making bus travel more attractive to young people. 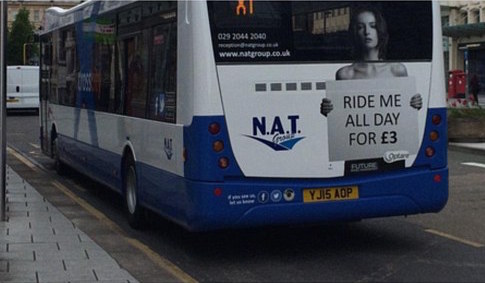 At first, the bus company defended its position, but as the storm on social and national media raged, the company was forced to apologise and withdraw the adverts.

Sexism isn’t the biggest campaign mistake the bus company made!

The bus company is quite rightly being roundly pilloried for being sexist but that isn’t the biggest campaign mistake the company made. The real downfall was context.

Just because NAT had a fleet of buses at its disposal, it doesn’t mean it’s the right medium to advertise. One angry mum – who I guess was stuck behind one of the buses – tweeted ‘how am I supposed to explain this ad to my primary school kids?’

The campaign was always likely to draw criticism because too many members of the public who weren’t the intended target audience would be exposed to the message.

If, for example, the campaign had been in the form of posters in the toilets of the city centre pubs and clubs, then the bus company would have stood a much better chance of getting the message over in the tongue-in-cheek way it intended.

Is all publicity good publicity?

Given the flack that NAT is taking, it would be a smart move to make public reparation for its error of judgement. But I can’t help feeling that once the dust has settled on this, someone, somewhere at the company will secretly be delighted at all the media exposure.