OK, it’s time to draw a line under my Twitter venture. While I’ve enjoyed my stint as @itspaulkirby and learned a lot from it, it’s time to revert back to @paulkirby.

By way of explanation I’ve had a Twitter account @paulkirby since Jan 2009 and it’s fair to say I dabbled with it at first so its usage and growth has been sporadic. 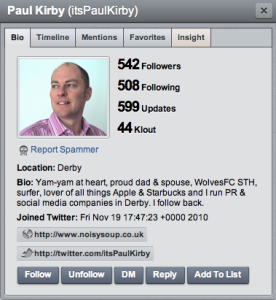 As a PR man at heart I decided to be my own social media case study and started @itspaulkirby at the turn of this year – primarily to see how to grow an audience on Twitter. After all, if I’m advising others about the virtues of it then it’s important to practice what you preach, right?

BTW – this is the disclaimer part and I must point out that this is the path I’ve taken and there are other strategies out there.

I’d originally planned to use free tools like Tweetspinner to grow my audience quickly and in some cases indiscriminately. But it’s not all about the numbers and I decided to be more targeted and selective about whom I’d connect with and where those people were in the world.

Who I followed
These are the people I wanted to follow and who would hopefully follow me:
– People I know and love
– People I work with or would like to work with
– People and businesses in Derby
– Fellow Wolves fans
– The odd celeb (but not many as I’m not prepared to follow them if they don’t reciprocate)

How I did it
I subscribe to the twitterquette rule of thumb of having a roughly equal number of the people I follow and those that follow me at any one time.

So I built it up in small increments, following no more than 50 people at a time in accordance with my target market by cherrypicking the followers of key influencers such as @officialwolves @derbyshirenews @marketingderby and following them.

And then it was a case of sitting back and seeing who wanted to be in my gang as well as wanting me in theirs.

Every other week I’d refine my list by using Manageflitter to remove people that didn’t wanna know.

By doing this I built it up to more than 500 followers/following which is awesome by most people’s standards, average by some and measly by a few. But I was happy with it.

I was also happy with what I got out of Twitter, namely:
– the banter with some awesome people
– generating a response to my marketing messages
– connecting with new people that I had no idea I had some much in common with 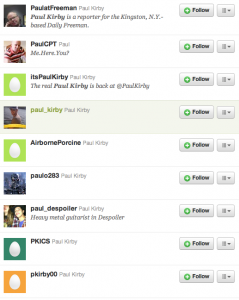 As more people join the Twitterverse the more you see instances of inventive handles because a lot of the good or common names have long since been claimed.

Search Paul Kirby for example and you’ll see a number of derivations of it but I claimed it first and have really missed being the original @paulkirby.

Will you still be a buddy?
If you’re still reading this, I hope it’s now as clear as mud why @paulkirby went away and why it’s coming off the backburner and that you’ll forgive any inconvenience I may have caused.