In virtually any form of marketing, one of the most effective ways to capture consumers’ attention is to tie your campaign into prominent calendar, seasonal and news events, such as a royal wedding, Halloween or the summer holidays.

So it is good to see that many companies are currently taking advantage of the opportunity during this year’s run-up to Christmas to boost their profile with a measure of perfectly timed festive PR. 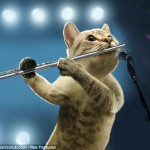 Picture thanks to Maverick Arts and Rex

And one of the best examples of this in recent days has to be Sussex-based creative publisher Maverick Arts.

The company has just launched an amazing feline-themed 2012 calendar that features 12 pictures of supercool cats appearing to play a variety of musical instruments.

From a stunning picture of two cats jamming on electric guitars in a makeshift studio to a grey and white moggy giving its all on a traditional accordion, the calendar is sure to make a popular stocking filler with cat lovers this coming Christmas.

But the company clearly realised that its imaginative catty creation would also prove popular with newspaper editors looking for something to brighten up the winter news agenda.

And it was fully justified in doing so, as several national newspapers have printed pictures from the calendar and covered the story behind it. 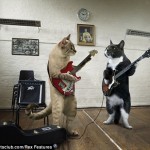 Picture thanks to Marverick Arts and Rex

But Maverick Arts is not the only business that is set to see a healthy uplift in sales by cashing in on media interest for Christmas stories.

M&S has also got in on the act with its new and rather strange adaptation of the artificial Christmas tree, where what you actually get is only a quarter of it.

Although the high-street chain claims that it will be ideal for homes with limited space, where it will slot neatly into the corner of any cramped living room or hallway, we’re not entirely convinced by the product in its own right.

Nevertheless, on the novelty factor alone, M&S has already shown it is onto a PR winner, with a clutch of national dailies giving the high-street chain invaluable publicity just as it enters its busiest period of the year.

However, as any PR person will tell you, Danish toy manufacturer Lego is the one company that never fails to come up trumps at Christmas time.

And, as we reported just last week, it’s gone and done it yet again this year by constructing its own headline-grabbing 10-metre high Christmas tree at London’s Kings Cross St Pancras railway station.