And you’d be right.

But if you thought that scale of success at the games was a measure of each Olympic athlete’s earning potential then you’d most definitely be wrong.

It turns out that many of our leading sponsorship agencies consider popularity on social networking site Twitter to be worth more than Olympic gold and a more accurate guide to the sponsorship income that a successful Olympian can expect.

One agency leading the way is M&C Saatchi Sport and Entertainment, which has just published a Top 10 list of GB athletes in terms of numbers of followers and mentions on the microblogging platform. 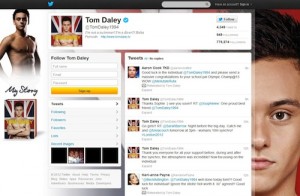 And by far the most popular Olympian is bronze-winning 10m diver and teen heart-throb Tom Daley who, despite relatively modest success at the games, enjoys more than half (57%) of all athlete mentions on Twitter.

Perhaps unsurprisingly there does appear to be some degree of correlation between the scale of sporting achievement and popularity on the social media site, with Jessica Ennis, Mo Farah, Andy Murray and Bradley Wiggins occupying the remaining four places in the top five.

As PR practitioners with a keen eye on all things social media, we’d urge every sportsman and sportswoman with ambitions for commercial sponsorship to get themselves on Twitter as soon as possible.

In view of the way that brands are now using the social media tool to get an insight into the ability of our athletes to connect with the public, a presence on the social networking platform is something that no aspiring sporting professional can simply ignore.