As Diane Abbott and Ed Miliband have proved, people in the public eye are only ever one tweet away from, at best, embarrassment or, in a worst case scenario, a full media storm.

"White people love playing “divide and rule” We should not play their game."

That tweet by the Hackney North and Stoke Newington MP in the wake of the verdicts in the murder trial of Stephen Lawrence caused furore which resulted in calls for her to resign.

Abbott was apparently chastised by Labour leader Ed Miliband but only hours after taking the moral high ground, a crucial spelling error in a tweet from @Ed_Miliband marking the passing of TV presenter Bob Holness has dropped him right in the (Gordon) brown stuff.

Apparently, within minutes the message was removed and replaced with the correct spelling of the game show. 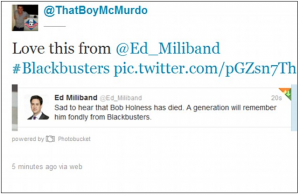 "Sad to hear that Bob Holness has died. A generation will remember him fondly from Blackbusters."

Whether this actually happened or it was a bit of cheeky Photoshop shenanigans, the end result has been a series of embarrassing headlines for Miliband.

You’d think the Abbott and Miliband debacles would act as a warning to other politicians, celebs or brands to be extremely careful using social media platforms. But, sure as eggs is eggs, it’s only a matter of time before a business or public figure will be forced to apologise for ill-advised comments on Twitter or Facebook.

If you think about the fact that your business is only ever one tweet away from disaster surely you’d make damn sure that you had a clear strategy for using social media with strong editorial checks in place to prevent ill-advised comments seeing the light of day.

So, let’s open the book to see which brand or public figure is next to hit the headlines as a result of a social media gaffe. My money is on a footballer.